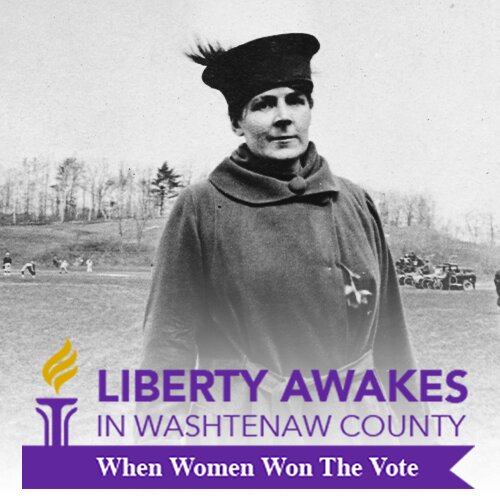 In 1920, one hundred years ago, the Nineteenth Amendment was ratified by 36 states–including Michigan–thus making it a constitutional right for women across the nation to vote.

This national quarrel, which began in the mid-19th century, created a social movement known as Woman’s Suffrage.  The debate it ignited about the role of women in a democracy lives on today.

Due to the 2020 pandemic and the temporary closures of many of our exhibit partners, we are making Liberty Awakes available online. Enjoy!

Thank you to Jeanine Delay and Zoe Behnke, long-time members of the League of Women Voters, for creating this outstanding exhibit. Their enthusiasm, thorough research, and attention to detail resulted in an exhibit filled with engaging local stories, photos, and people.  You won’t want to miss this.

We would like to give special thanks to the African American Cultural and Historical Museum of Washtenaw County for contributing the boards on the role of Black women in the struggle for women’s suffrage. In an effort to acknowledge the truth of the exclusionary history of the suffrage movement, we are putting these new boards first. They contain the bare fact of Black women being asked to march in the back of the parade to the brave stories of strong women fighting to make their voices heard.

In this commemorative historical exhibit, we recognize the individuals and groups in Washtenaw County who raised their voices and aired their conflicting views about expanding voting rights to women during the crucial decade of 1910 to 1920.

Click the yellow arrows (or use the dots at the bottom) to advance to the next slide.