Women who wanted to vote were smart, organized, and committed. But they had to persuade men—the only people allowed to vote—to support their efforts. It took almost a century. But finally, in 1920, it happened.

“There never will be complete equality until women themselves help to make laws and elect lawmakers.” 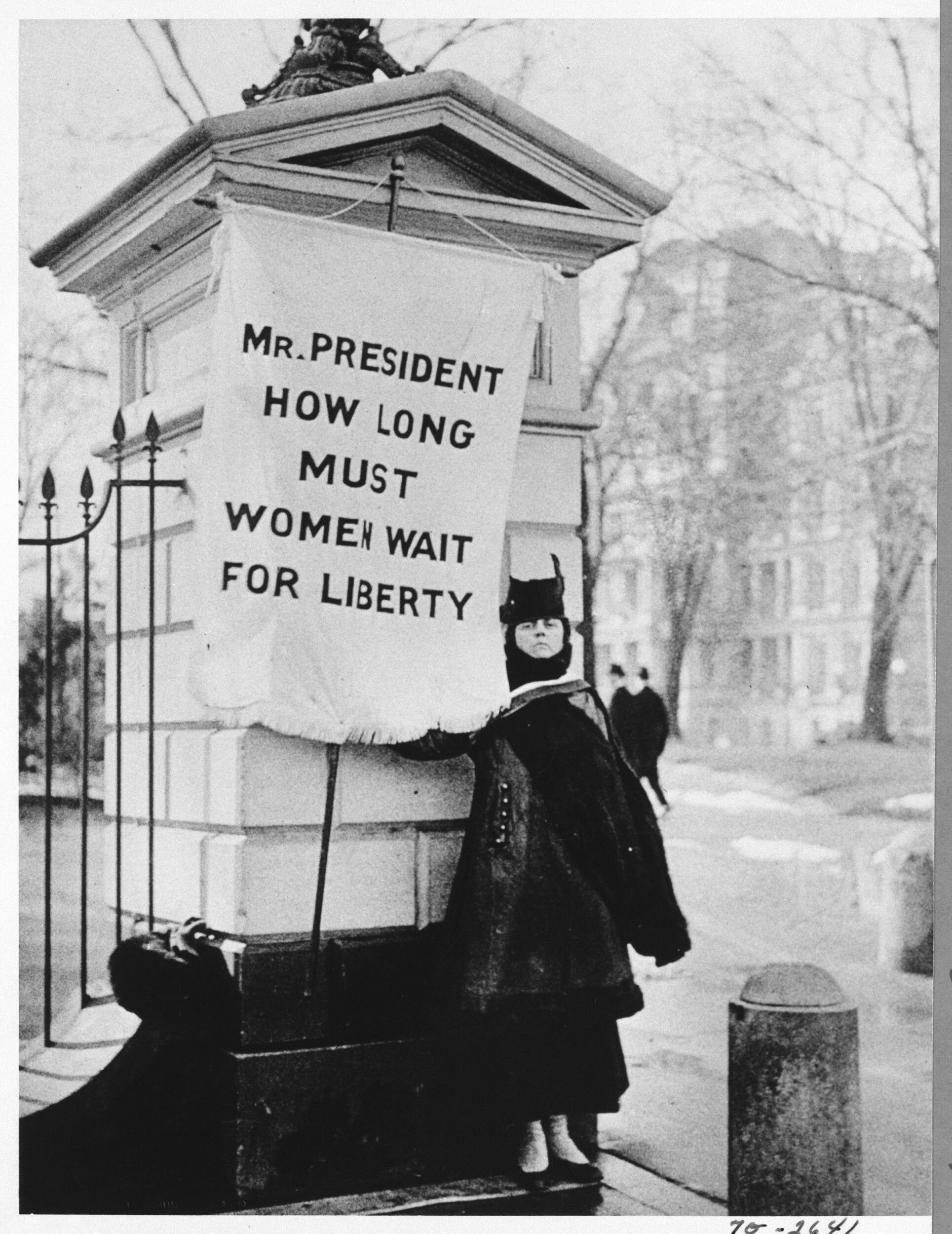 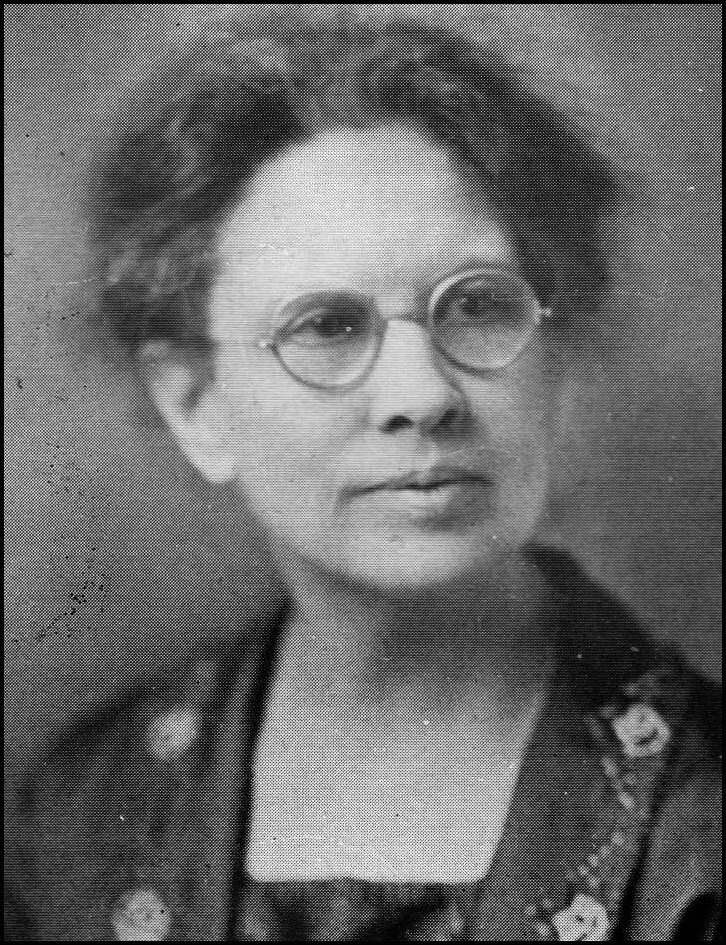 “In humanity, to believe in a thing means to get up and to do something.”

By 1900, Michigan women who owned property could vote on some bond issues and in school-related elections. But there were no local or state organizations devoted to the cause of votes for women.

These clubs brought nationally- and internationally-known suffragettes to town and members joined in local and national actions.

The issue was complicated by other factors. Many saloon and brewery owners were anti.  Brewers were afraid that if women got the vote they’d use it to make alcohol illegal.

Suffragists understood the power of a parade. Three Ann Arbor women traveled to Washington, D.C.  on the eve of Woodrow Wilson’s first inauguration to represent Michigan in a huge and carefully choreographed parade. 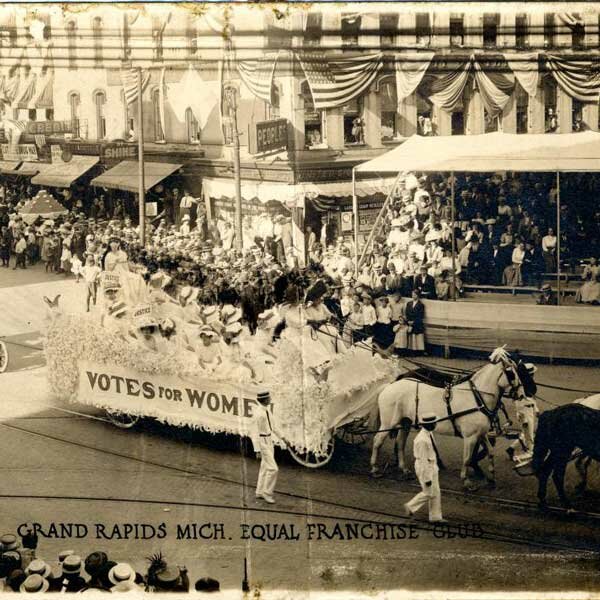 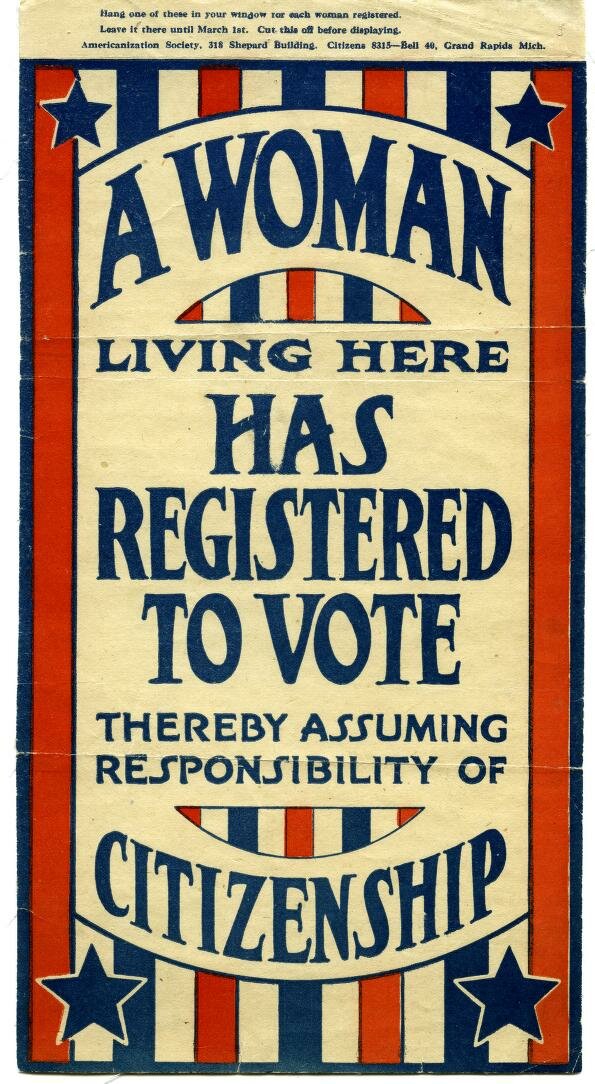 The United States became embroiled in World War I to “make the world safe for democracy.” But suffragists asked, “How can this be true when half the population has no vote?”

Their question rang true. On November 5, 1918, Michigan’s men voted to give women the right to vote in state and local elections. And finally, in 1919, President Wilson called for passage of a national suffrage amendment. The amendment was passed by Congress and ratified by the required 36 states on Aug 26, 1920, becoming the 19th Amendment to the United States Constitution.

Its simple text belies the difficulties and sacrifice required to pass it:

Suffragette: The Battle for Equality by David Roberts

Susan B. Anthony by Teri Kanefield

Rebel Voices: The Global Fight for Women’s Equality and the Right to Vote by Louise Kay Stewart

Bold and Brave: Ten heroes who won women the right to vote by Kirsten Gillibrand

Roses and Radicals: The Epic Story of How American Women Won the Right to Vote by Susan Zimet

Around America To win the Vote: Two Suffragists, a Kitten, and 10,000 Miles by Mara Rockliff

Miss Paul and the President: The creative campaign for the women’s right to vote by Dean Robbins

I Could Do That: Esther Morris gets women the vote by Linda Arms White

The Women’s Hour: The great fight to win the vote by Elaine Weiss

Mr. President, How Long Must We Wait?: Alice Paul, Woodrow Wilson, and the Fight for the Right to Vote by Tina Cassidy

Votes for Women: A Portrait of Persistence by Kate Lemay

Why They Marched: Untold Stories of the Women who Fought for the Right to Vote by Susan Ware

The Illustrated Feminist: 100 Years of Suffrage, Strength, and Sisterhood in America by Aura Lewis

“Winning the Vote: A Divided Movement Brought About the Nineteenth Amendment” by Lisa Tetrault. Humanities: the Magazine of the National Endowment for the Humanities, Summer 2019.

“How Black Suffragists Fought for the Right to Vote and a Modicum of Respect” by Martha S. Jones. Humanities: the Magazine of the National Endowment for the Humanities, Summer 2019.

“Women of Impact”, yearlong celebration of women’s achievements in recognition of the 100th anniversary of U.S. women securing the right to vote. National Geographic, beginning with the November 2019 issue.

“Women Have Had the Right to Vote for 100 Years. Here’s How to Celebrate”, by Mikaele Lefrak. WAMU, American University Radio, May 16, 2019.

“Alice Paul” A Brave Yet Imperfect Fight for the 19th Amendment” by Pete Morgan. The Radical Tea Towel Company, January 11, 2019.

“Shall Not Be Denied: Women Fight for the Right to Vote”, by Hannah Freece. Library of Congress Magazine, July/August 2019.

“When the Suffrage Movement Sold Out to White Supremacy” by Brent Staples. New York Times, February 2, 2019.

Michigan residents: To read the texts of the following two articles, visit https://mel.org/az.php, click on eResources, then search by title in the Academic Search Complete database: